Captain Mama is written by Graciela Tiscareño-Sato and illustrated by Linda Lens. 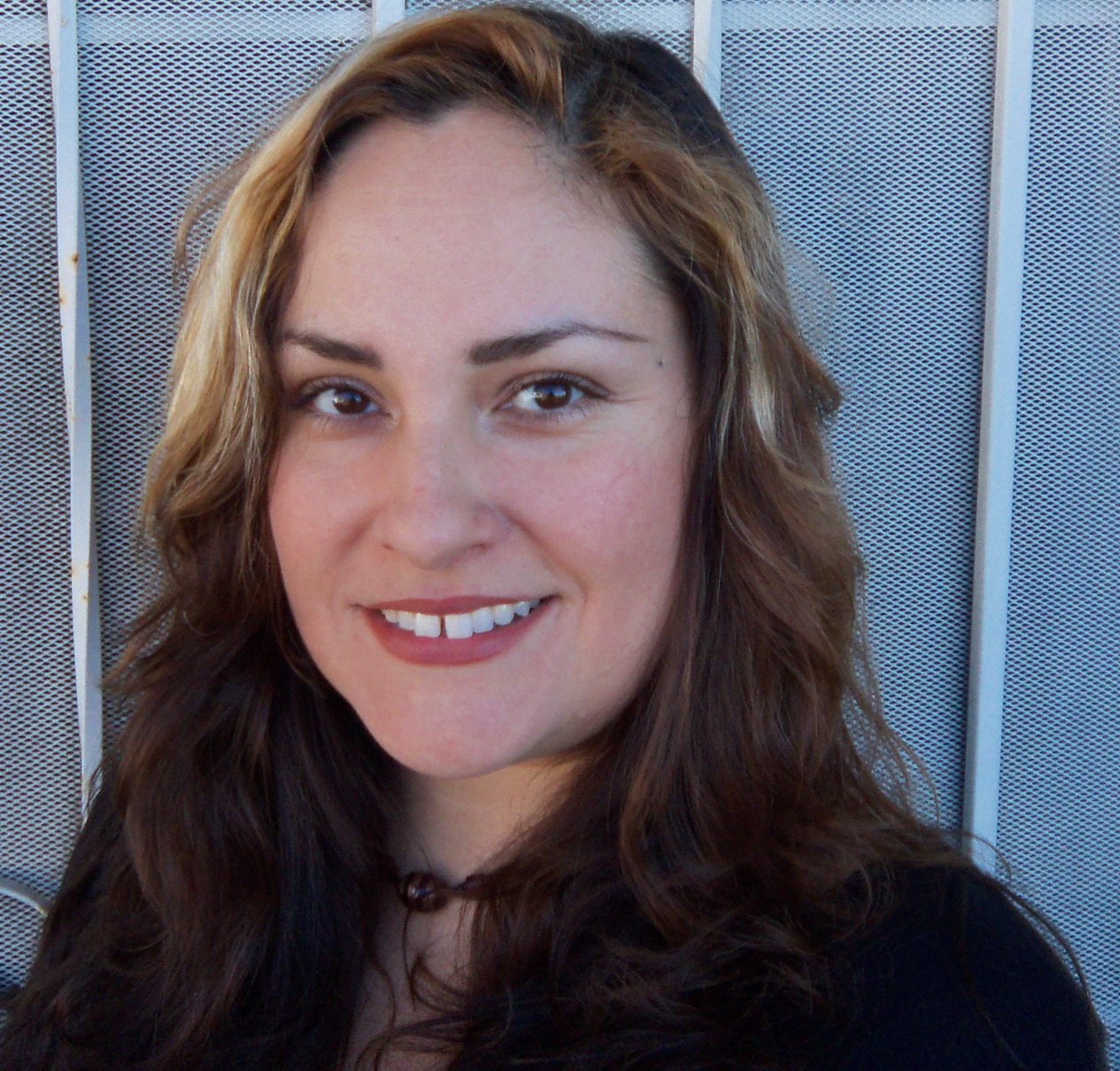 Linda Lens first found her passion for art as a small child with her grandmother, Donna. She made art her passion since her first thunderstorm. Finding her talent, she has never stopped drawing. From crayons to oil paint, Linda has played with it all.

The daughter of Air Force veteran Alberto Lens, Linda and her sister enjoyed visiting the library with their mother to check out too many children’s books. The beautiful illustrations and colors always fascinated Linda. From early on, one of her dreams was to become a children’s book illustrator. Her love for capturing human expression followed her throughout college. She earned a degree in Studio Art, specializing in portraiture, from California State University – East Bay in Hayward.

One of Linda’s favorite quotes is from the author Tom Robbins, who says, “The purpose of art is to provide what life does not.”

She lives with her son Johnny and daughter Saila, along with Cleo the black cat and two dogs, Shadow and Merlyn, somewhere near the ocean. 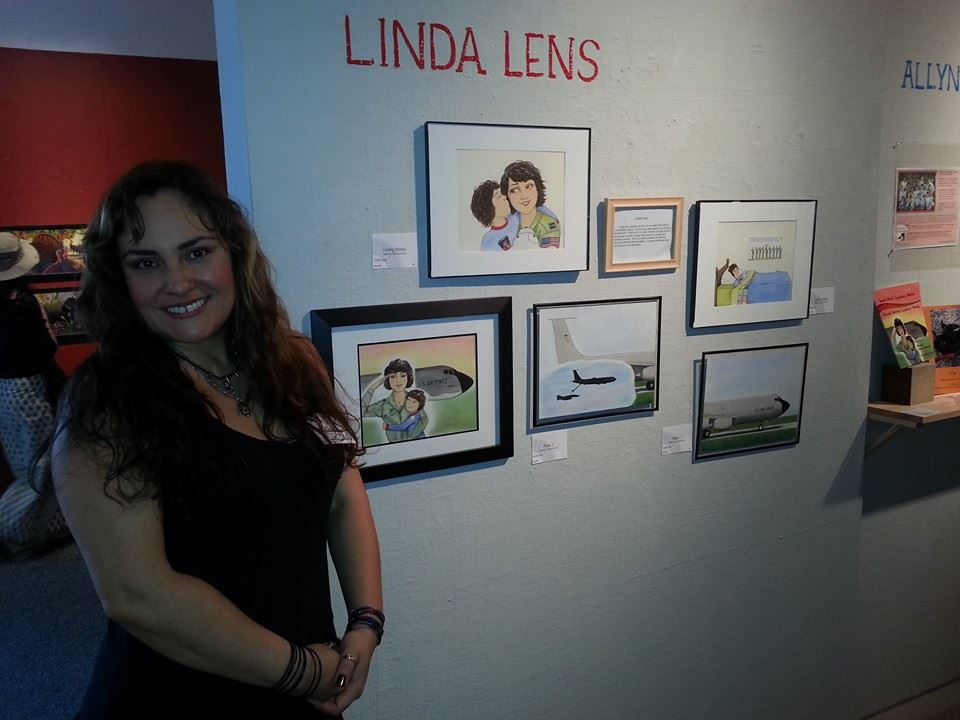 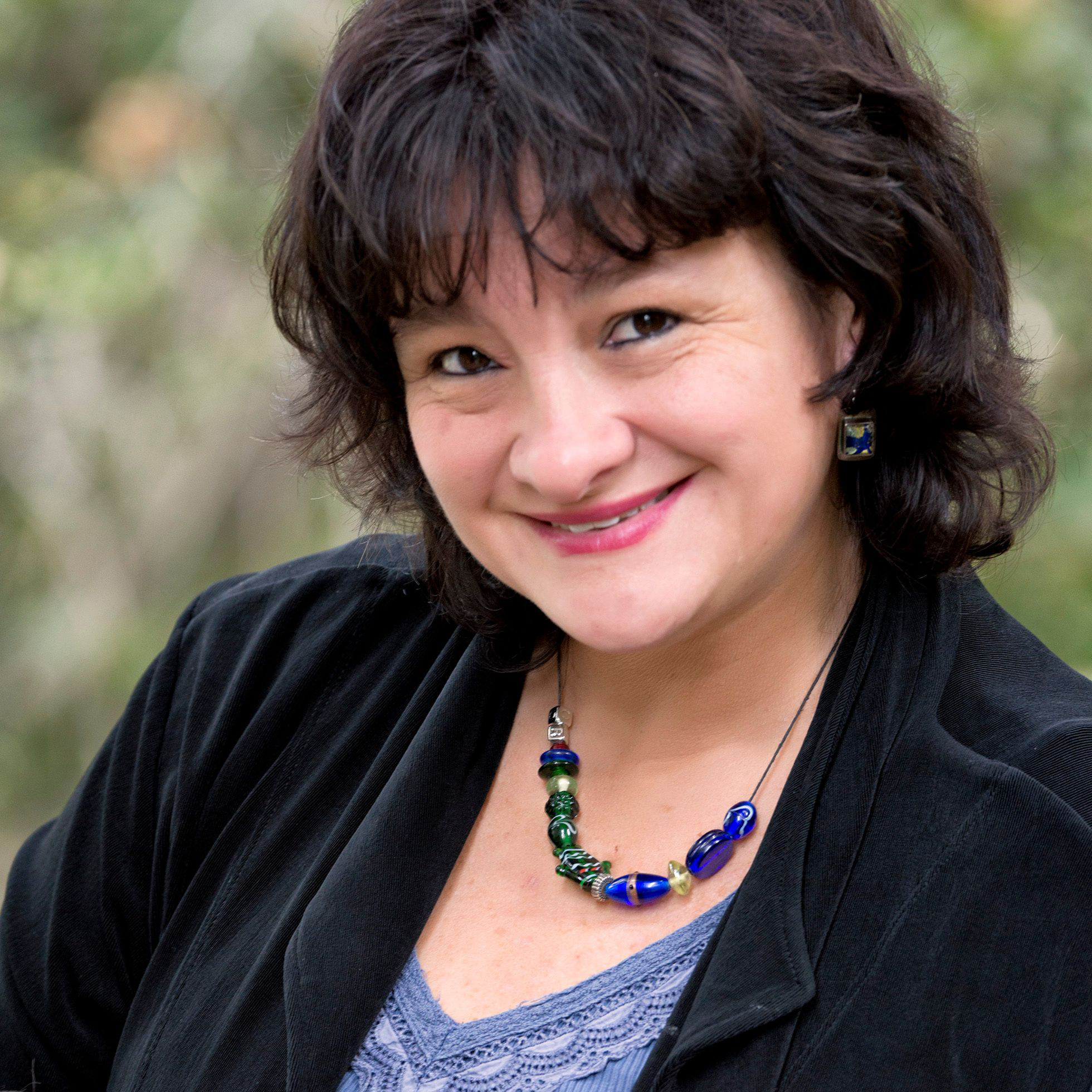 Graciela Tiscareño-Sato is a graduate of the University of California at Berkeley, School of Environmental Design, where she earned a degree in Environmental Design/Architecture while completing the Aerospace Studies program as an AFROTC (Air Force Reserve Officer Training Program) scholarship cadet. She was commissioned as a Distinguished Graduate and second lieutenant atop the Campanile on the Berkeley campus.

After Berkeley, she joined the active-duty Air Force and completed Undergraduate Navigator Training at Mather Air Force Base (AFB) in Sacramento. She graduated in the top 15% of her class of 25 students as the only woman in the class. She then trained in the KC-135R refueling tanker at Castle AFB in California before reporting into the 43rd Air Refueling Squadron at Fairchild AFB in Spokane, Washington.

Her first deployment was to Riyadh, Saudi Arabia. On that trip, she was a member of one of the first few aircrews to patrol and enforce the Southern NO FLY Zone in Southern Iraq after the conclusion of Operation Desert Storm. Flying two or three sorties a day over and near the city of Baghdad to prevent Saddam Hussein’s air forces from targeting Iraqi civilians earned her crew the prestigious Air Medal. This medal is awarded for “Meritorious achievement while participating in aerial flight; Per twenty-five (25) operational flights during which exposure to enemy fire is probable and expected.” In other words, combat sorties. This happened 10 months BEFORE Congress lifted the Combat Exclusion Law that barred women from being assigned to combat duties. During her keynote presentations, Graciela tells the story of how this Air Medal almost didn’t happen for her crew because of this technicality.

During her military career, Graciela lived on or visited four continents and flew for thousands of hours. As an instructor, she taught GPS systems, navigation systems and more in the classroom and in the cockpit. Her favorite rendezvous for refueling was with the SR-71 Blackbird as it came out of its high-altitude missions over the Earth at supersonic speeds. She was one of very few women that served on the NATO Battlestaff in Vicenza, Italy during the conflict in Bosnia-Herzegovina. Later she led a multi-service group of communications technicians at the U.S. Embassy in Quito, Ecuador in counter-narcotics operations. 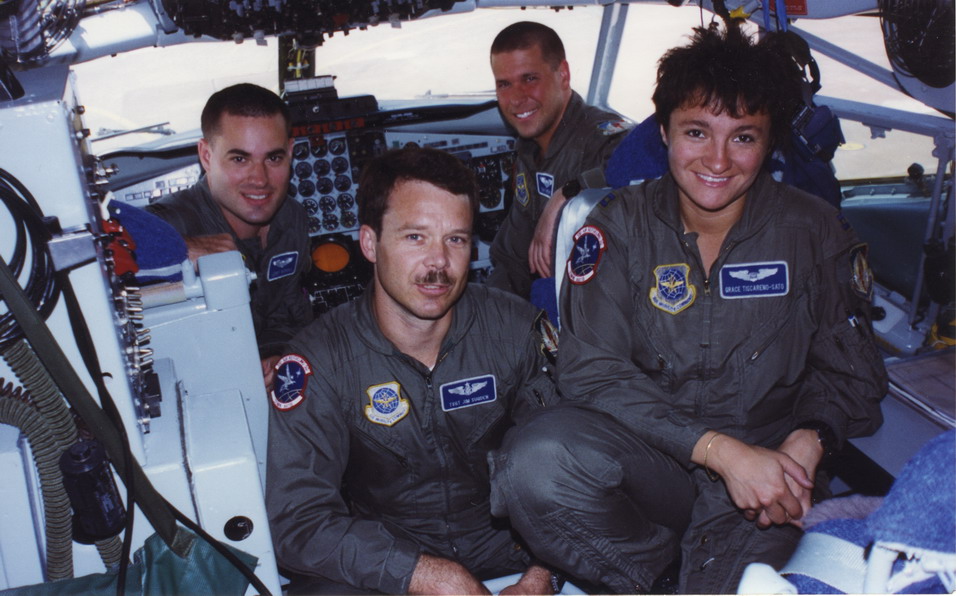 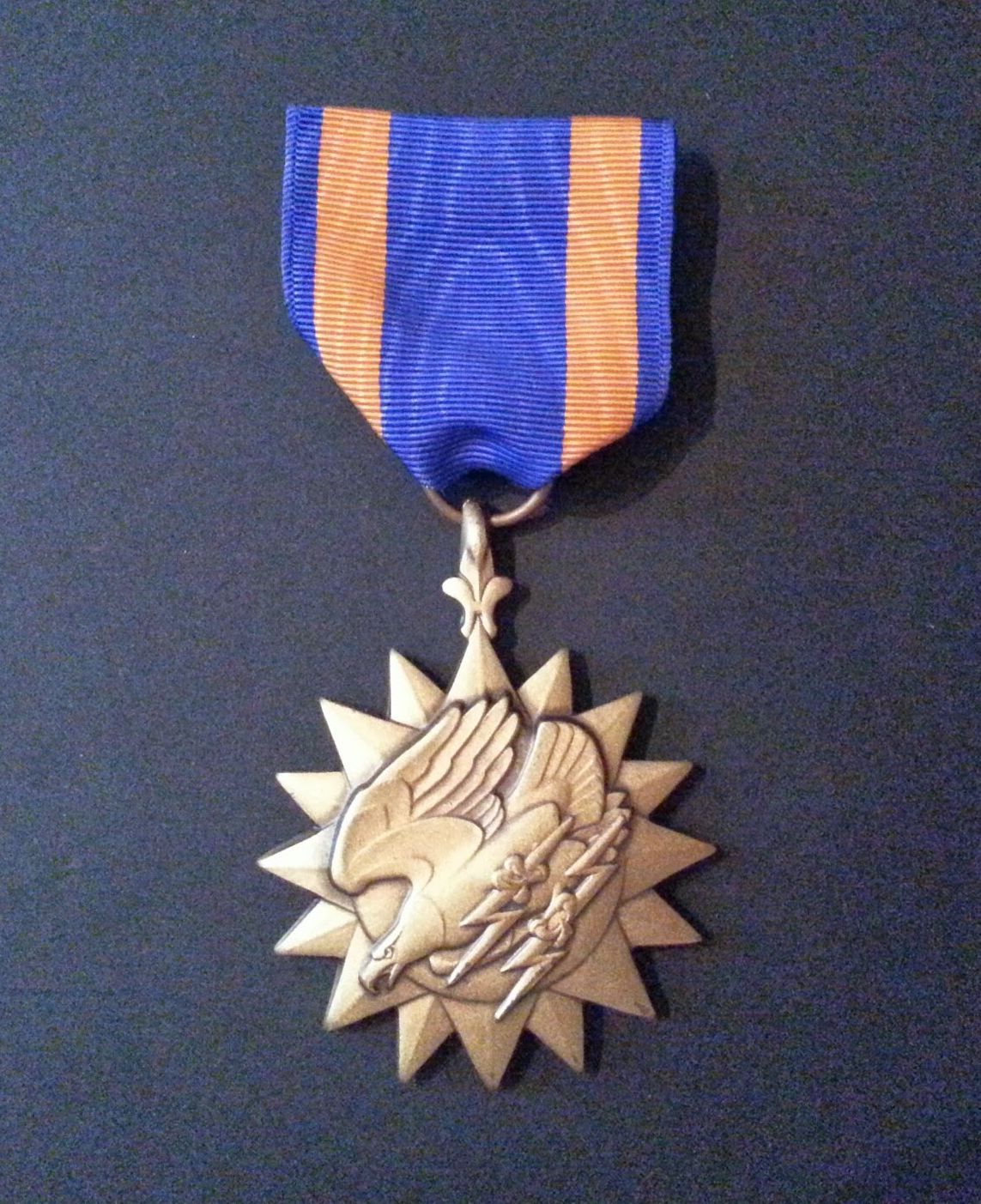 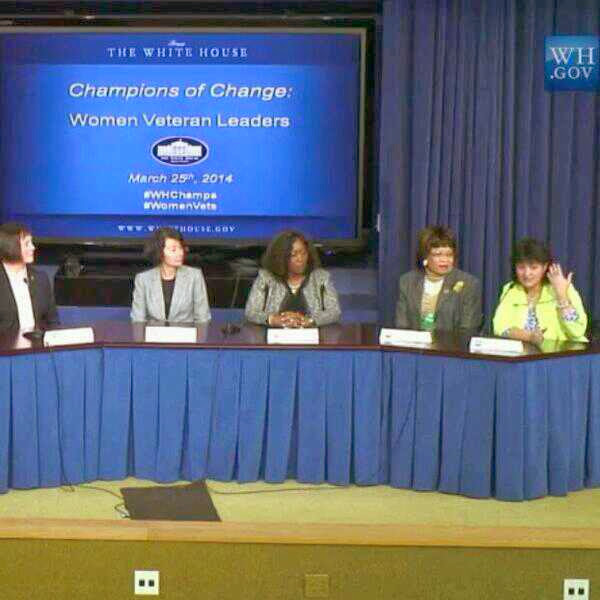 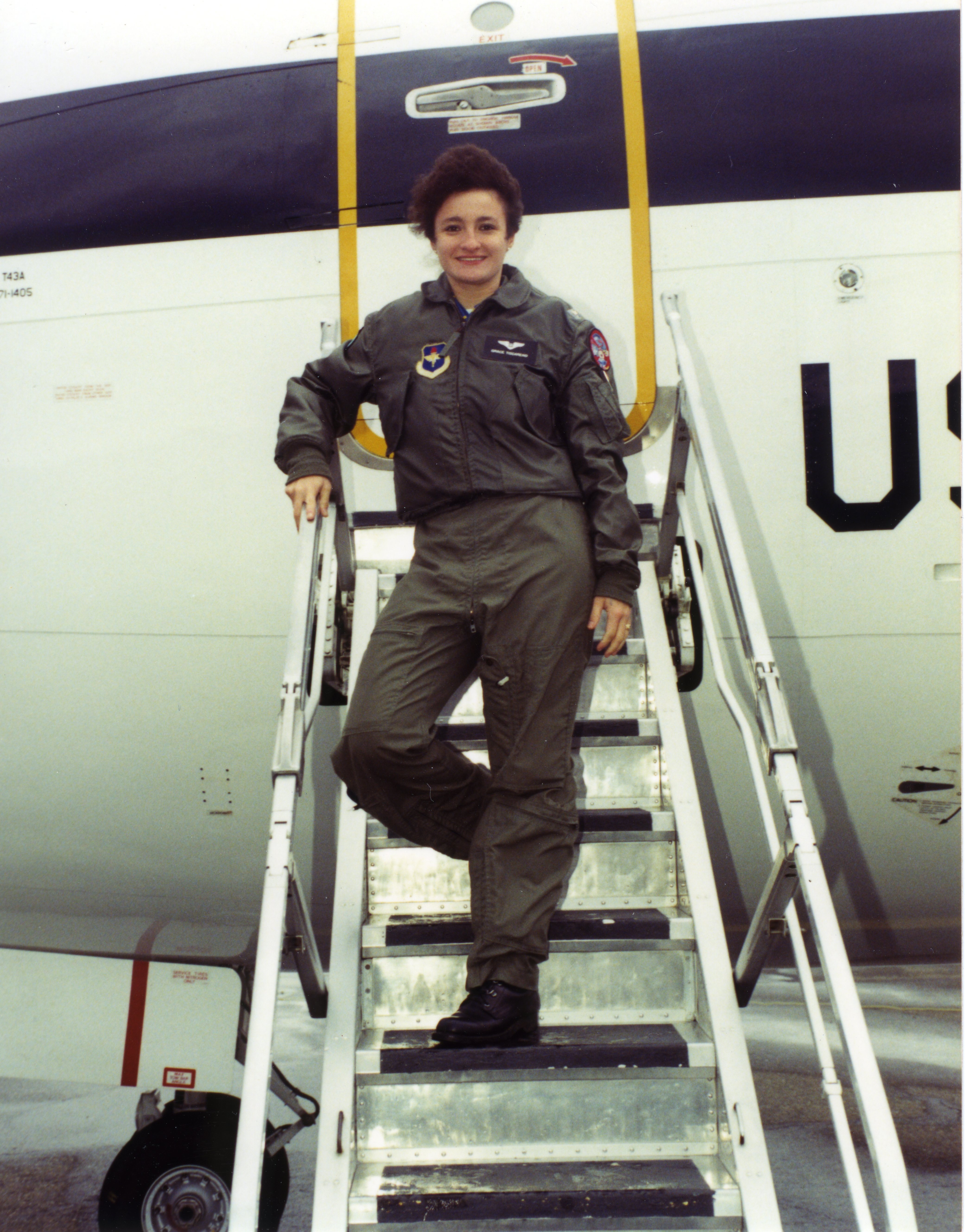 Her last mission abroad was planning and leading a two-week CAPSTONE mission to Asia Pacific theater to introduce newly – minted generals to their new posts in Malaysia, Korea, Singapore, Hawaii, Okinawa, Japan and more. She spent almost ten years on active duty as a navigator and instructor, eventually also becoming a wing contingency planning officer. During her active duty service, she earned a Master degree in International Management, with an emphasis in Global Marketing, from Whitworth University in Washington. She speaks English and Spanish fluently.

Graciela is the Founder of niche publishing, marketing and communications firm, Gracefully Global Group, LLC. She is the author of the award-winning entrepreneurship book Latinnovating: Green American Jobs and the Latinos Creating Them, which highlights Hispanic entrepreneurs innovating in the green economy. In between military service and entrepreneurship, she spent nine years in global marketing roles at Siemens, where she applied her military career lessons in a global, multicultural, corporate environment. Her thought leadership pieces have published in the U.S. and Europe including American Careers, Huffington Post, Fox News, Hispanic MBA, Communications News and many other publications.

Graciela is also the author of an Amazon bestselling bilingual children’s book titled Good Night Captain Mama/Buenas Noches Capitán Mamá, the first bilingual children’s book about why mommies serve in the military [ISBN: 978-0-9834760-3-0.] This ground-breaking book was honored at the American Library Association National Convention (2014 International Latino Book Awards) in the category of “Best Educational Children’s Book – Bilingual.” Since then, it’s won awards in competitions among military writers, independent publishers and the prestigious Writers Digest Magazine (1st Place, Children’s Picture Book.) Captain Mama and her children will star in a bilingual aviation travel adventure series in the years to come. The second award-winning book in the series (Captain Mama’s Surprise) published in summer 2016, was reviewed in School Library Journal and was featured in USA Today. Ms. Tiscareño-Sato is now writing the third book in the Captain Mama series.

Ms. Tiscareño-Sato was honored by The White House as a Woman Military Veteran Leader Champion of Change in March 2014. Details are here. The recording of the White House event is here. Her Congressman gave a moving tribute to her life and work here.

We use cookies on our website to give you the most relevant experience by remembering your preferences and repeat visits. By clicking “Accept”, you consent to the use of ALL the cookies.
Do not sell my personal information.
Cookie SettingsAccept
Manage consent

This website uses cookies to improve your experience while you navigate through the website. Out of these, the cookies that are categorized as necessary are stored on your browser as they are essential for the working of basic functionalities of the website. We also use third-party cookies that help us analyze and understand how you use this website. These cookies will be stored in your browser only with your consent. You also have the option to opt-out of these cookies. But opting out of some of these cookies may affect your browsing experience.
Necessary Always Enabled
Necessary cookies are absolutely essential for the website to function properly. These cookies ensure basic functionalities and security features of the website, anonymously.
Functional
Functional cookies help to perform certain functionalities like sharing the content of the website on social media platforms, collect feedbacks, and other third-party features.
Performance
Performance cookies are used to understand and analyze the key performance indexes of the website which helps in delivering a better user experience for the visitors.
Analytics
Analytical cookies are used to understand how visitors interact with the website. These cookies help provide information on metrics the number of visitors, bounce rate, traffic source, etc.
Advertisement
Advertisement cookies are used to provide visitors with relevant ads and marketing campaigns. These cookies track visitors across websites and collect information to provide customized ads.
Others
Other uncategorized cookies are those that are being analyzed and have not been classified into a category as yet.
SAVE & ACCEPT